What you need to know about “bloat”

A surprising number of pet lovers have dogs at risk for “bloat”, yet they don’t know much about the condition. 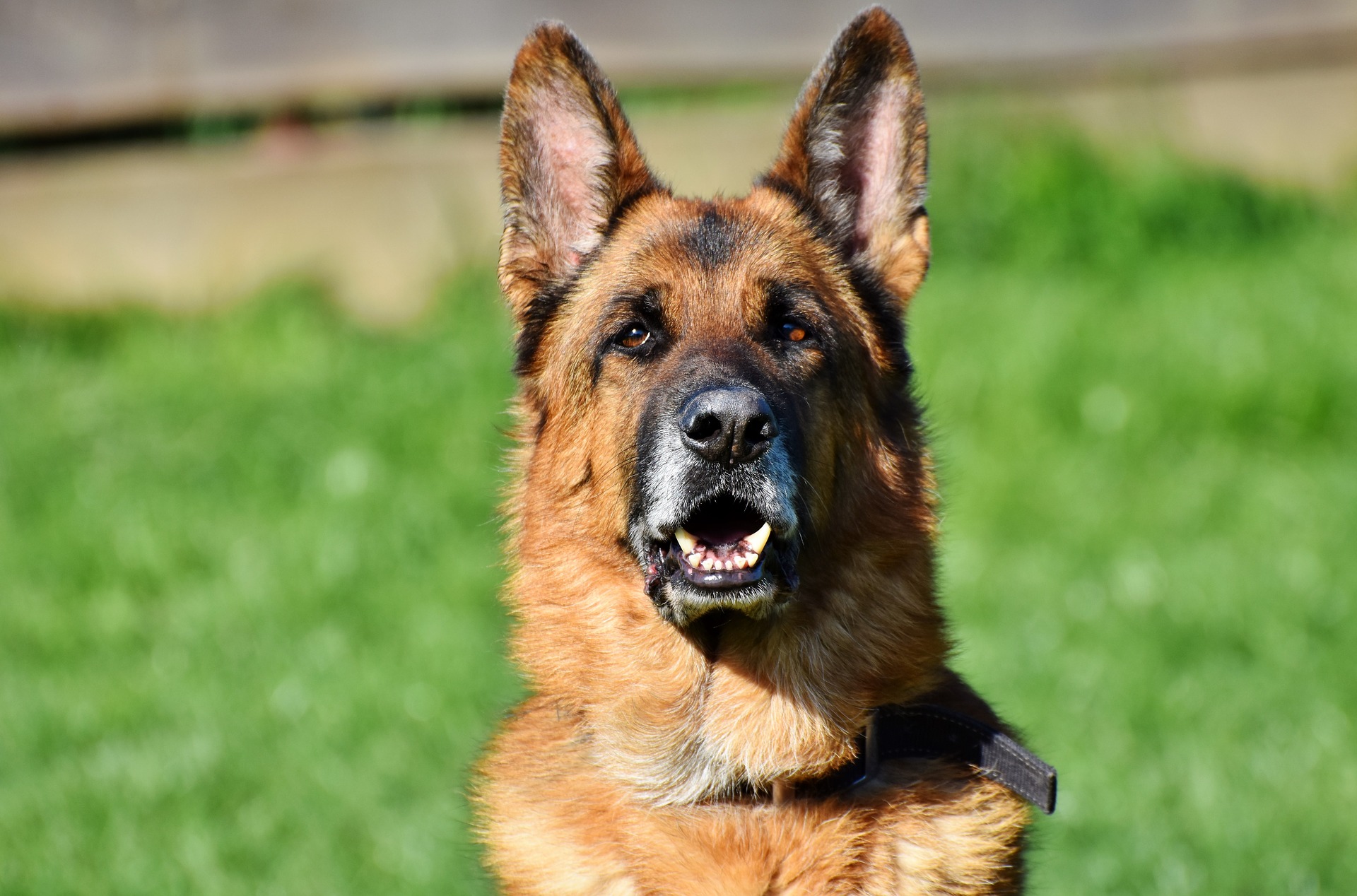 If you own a dog at risk, it is very important for you to know about it.

Bloat is a life-threatening condition with many synonyms, including twisted stomach, gastric dilatation and gastric torsion. The medical expression is Gastric Dilatation Volvulus (GDV), which is what vets typically call it.

In this condition, a dog’s stomach distends with air to dramatic proportions (see X-ray). This is called gastric dilatation (GD). An X-ray of the belly would show a “single bubble”, which means that the stomach contains air in a single “pocket”. 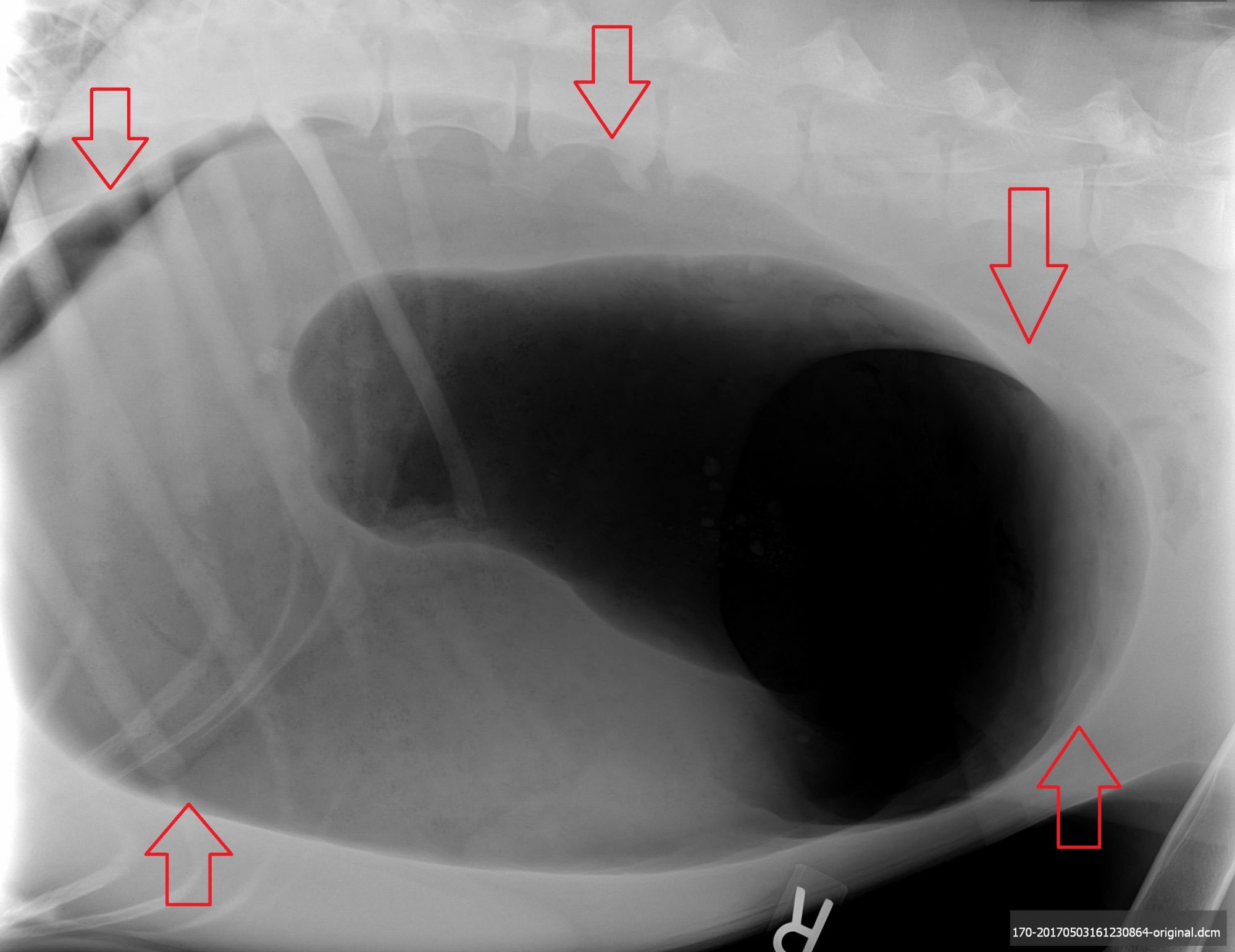 A classic example of the “single bubble” of GD in a German Shepherd. The arrows show the size of the stomach

The stomach can also twist onto itself, cutting off blood supply to the stomach and other major organs. It also blocks the exit of air and stomach contents. This is called Gastric Dilatation Volvulus (GDV). An X-ray of the belly would show a “double bubble”, which means that the stomach contains air in 2 separate “pockets”. 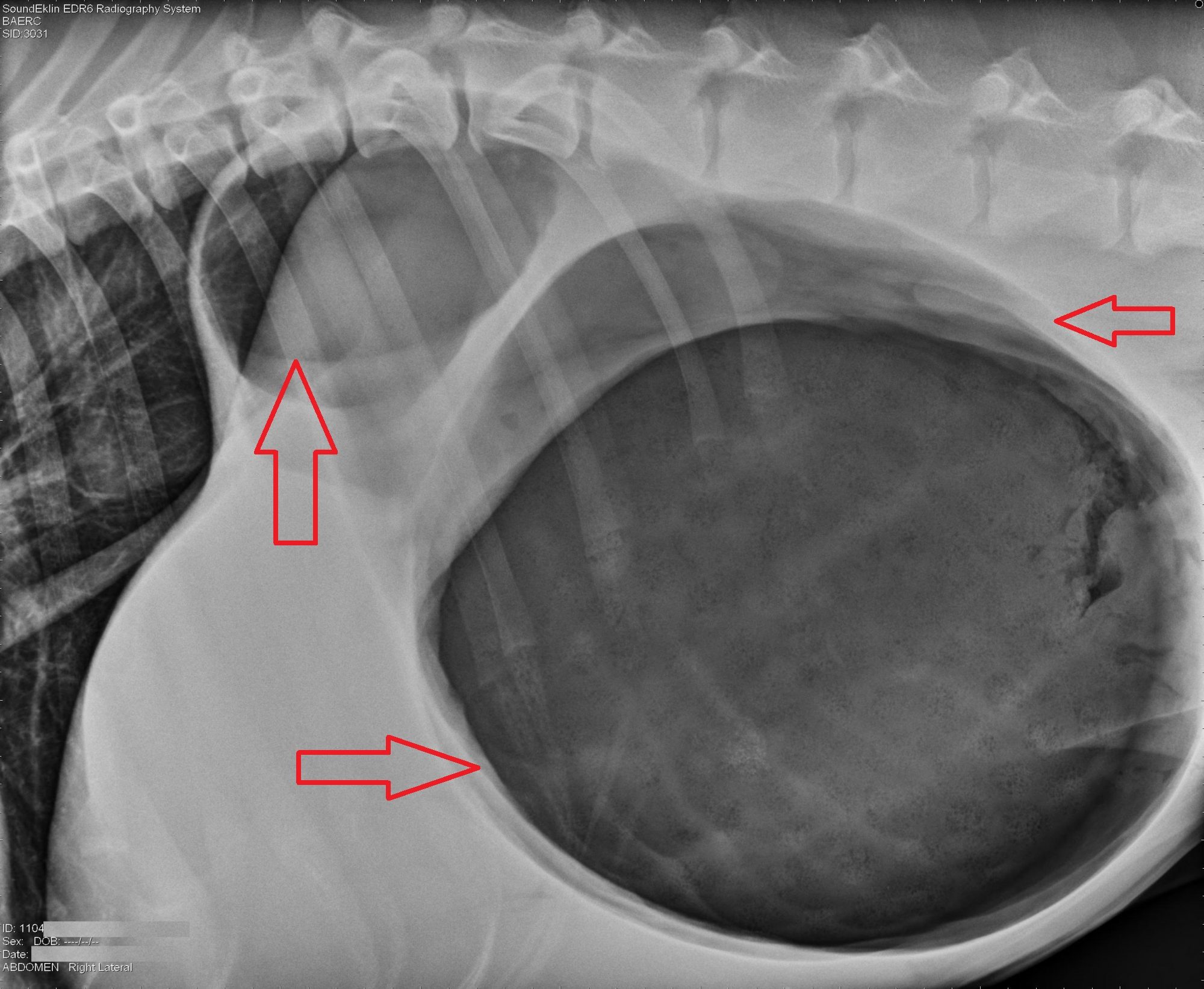 A classic example of the “double bubble” of GDV

Obvious signs of GDV include a huge (bloated) belly and “retching”, which means unsuccessful attempts at vomiting.

There are many risk factors. Some are questionable if not plain ridiculous. Here are a few scientifically proven causes of GDV.

* Large and giant breeds are at higher risk for developing GDV. Breeds such as Great Danes (the number 1 breed), Mastiffs, German Shepherds, Old English Sheepdogs, Weimaraners, and St. Bernards are all at risk but it also occurs in smaller breeds like Boxers, Basset Hounds and Standard Poodles.

* The disease is related to the dog’s body conformation, i.e. his or her shape. Deep chested dogs are more likely to have GDV. This picture of a Great Dane is a great example of what we mean by deep chest. 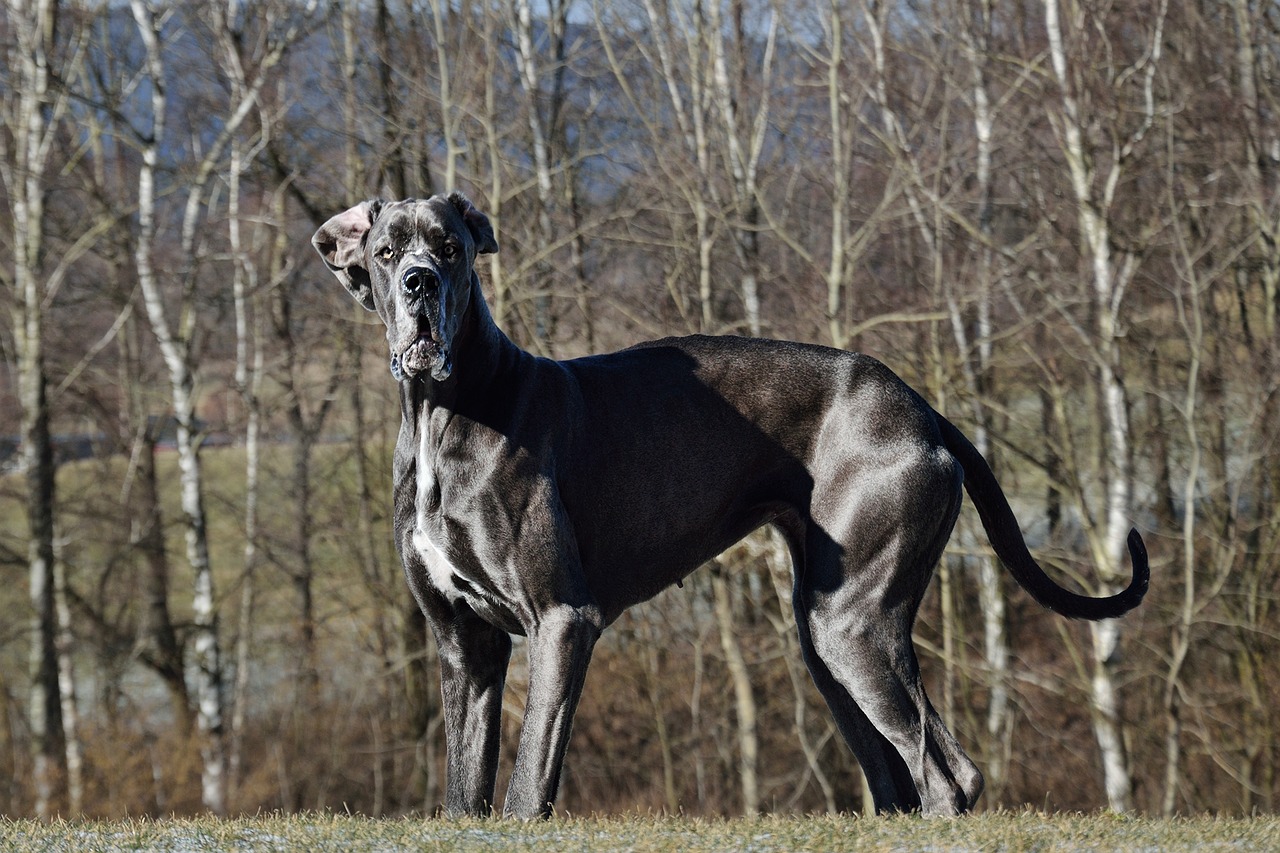 * Developing GDV can also be partially genetic: a dog related to a dog who suffered from GDV is at a 20% higher risk.

* Stressful situations or environments can contribute to GDV. We know that dogs who are boarded can bloat, possibly from being stressed out. The same applies to storm and fireworks.

* Food and water intake have been a commonly heard cause of GDV. Rapid eating, once daily feeding, and the type of food given can all be a factor in GDV risk. Too much water prior to vigorous exercise or prior to/during meals are believed to play a role in the development of GDV.

* Age can play a role in GDV. As dogs age, they experience some changes in their abdominal cavity (e.g. stretching of ligaments of the stomach), which can increase their risk.

While scary and life-threatening, the twisting of the stomach can be prevented with surgery. Dogs at a higher risk for suffering from GDV can have a preventive surgery called a prophylactic gastropexy, or “pexy” for short.

This surgery entails stitching the stomach to the inside of the belly. When performed by someone experienced, it dramatically decreases the risk of the stomach twisting. This simple procedure can be done at the same time as a spay or a neuter.

The picture below shows the end result of a prophylactic gastropexy after a recent patient of mine, Zeke, a 1 year old German Shepherd, was neutered. 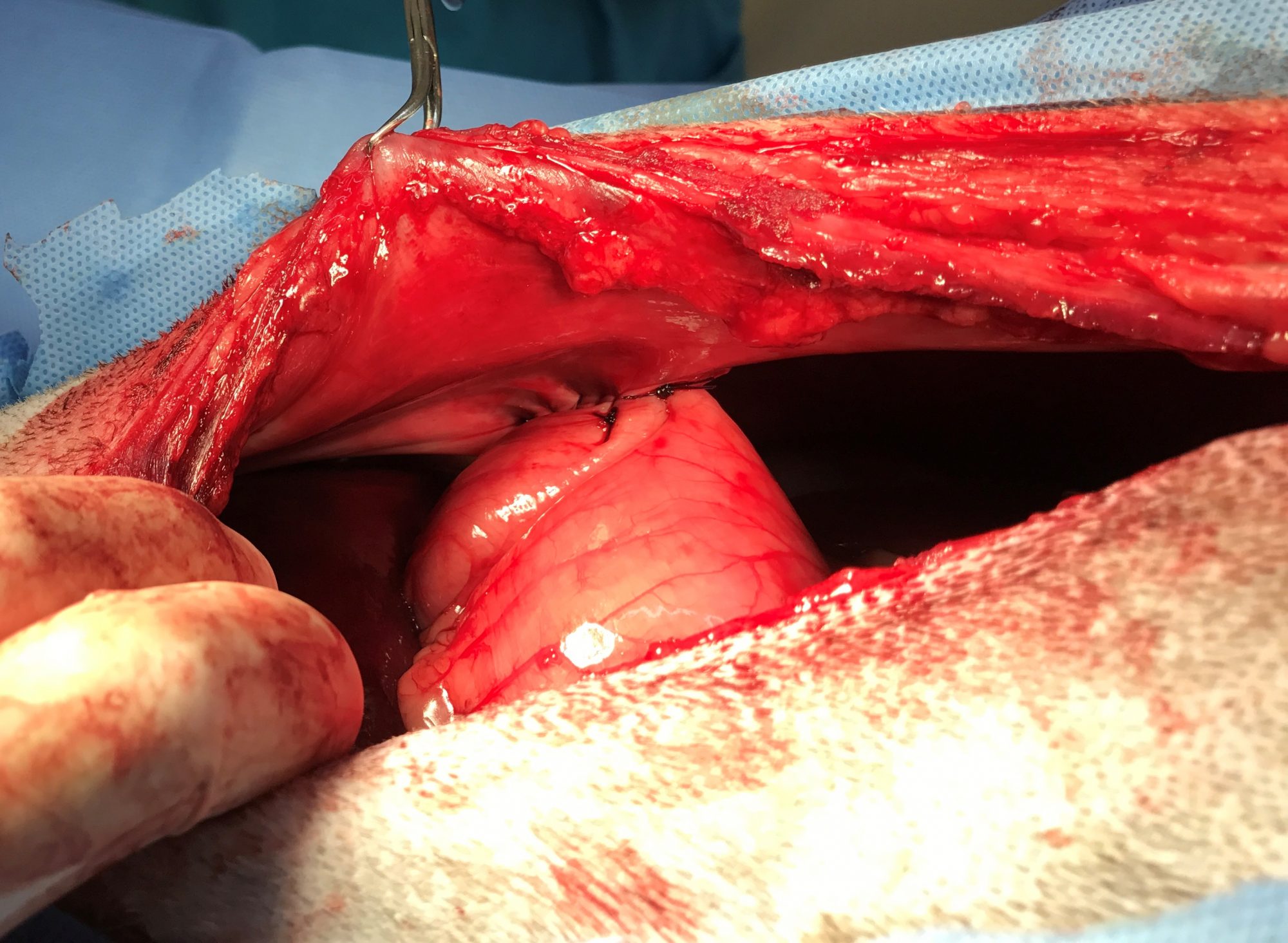 Very importantly, the dog can still “bloat” (a terrible, very misleading name) after a prophylactic gastropexy. It’s meant to prevent the twisting, not the “bloating.”

Should it happen, the dog must be rushed to the closest vet or ER to pass a tube into the stomach to remove the air, followed by stabilization with IV fluids etc.

If a dog’s stomach has distended and twisted, surgery entails:

. Removing the air from the stomach ASAP.

. Repositioning the twisted stomach in its natural position.

. Performing a gastropexy (see above).

. Assessing the spleen, which can be damaged and may need to be removed.

. Looking at every organ in the belly to make sure nothing else needs to be addressed (“exploratory laparotomy”).

For additional information about Gastric Dilatation-Volvulus, follow this link to read a more in-depth article I wrote for veterinarians: