Angel and demon (The amazing story of one tough cancer survivor)

His family vet had incompletely removed a mass on the gum of the lower jaw (aka mandible). It turned out to be malignant melanoma, an aggressive type of cancer (you may have heard of it in the skin of people or pets).

Therefore, more tissue, i.e. part of the jaw bone, had to be removed. This is called a partial mandibulectomy.

Below is an X-ray that shows the extent of the surgery (between the red arrows).

Just a few hours after this invasive surgery, Oliver ate!

His nurse wrote: “Oliver is awake and walking around in his cage. I offered him small amounts of his own blenderized dog food and he ate it when I hand fed him. He also ate a little of the boiled chicken that his owner brought.”

Would you have believed that a dog would eat a few hours after a big part of the jaw is removed?

His super dedicated owner then chose to give Oliver the melanoma vaccine.

This is a very rare situation. We actually have a vaccine… against cancer!

“He had his checkup exam today and chest radiographs. I am extremely happy to report everything looks good.

X-rays are clear and he is running around like a puppy, playing, eating and is unaffected after his surgery.

He is back to eating his kibble (not softened) and chewing on his toys.

I cannot thank you enough for your patience, professional advice on how to proceed, and your amazing skills as a surgeon.

His owner reached out to me because he started gagging, coughing and having difficulty breathing while awake, and making weird sounds while sleeping. He also couldn’t bark anymore…

His family vet did an exam of the mouth, and found a big mass, apparently attached to the roof of the mouth. Clearly, it was blocking his airway.

We performed emergency surgery the very next day.

The mass was the size of a walnut, which is huge for such a small dog. Upon further exam, under anesthesia, the mass was actually not attached to the roof of the mouth, but to the right tonsil.

Here is a picture of Oliver just before surgery – you can vaguely see the mass inside the mouth. You can also see the plastic tube which delivers oxygen and anesthesia gas.

WARNING – what follows is graphic, read further at your own risk !!!

Surgery was rather tricky, but we were able to remove the mass safely.

Here is a postop picture. At the end of the red arrow are the stitches.

And this is the actual mass, just before we sent it to the lab for a biopsy.

About a week later, the biopsy confirmed the suspicion: the mass was the same as last year, a malignant melanoma of the right tonsil. The only good news: we got it all.

Since the initial cancer was in the right lower jaw, the theory is that this second mass could have spread from the initial mass, even though it had been removed completely at the time. Of course, it’s hard to prove, which is why it’s only a theory.

Shortly after surgery, Oliver could breathe much better.

Oliver is now recovering and we wish this cancer survivor the very best.

Emmie, a 9 year old Golden Retriever, had a small mass on her left thigh.

For weeks, it waxed and waned.

Eventually, it almost disappeared. Instead of brushing it off, her amazing owner reached out to me and asked me to remove it regardless.

This is how tiny the mass was at the time of surgery: less than 1 cm, or less than half an inch. It was basically flat. It would have been impossible to see or feel under a Golden retriever’s hair!

How many pet owners do you think would have requested surgery to remove it?

Well, Emmie’s owner sure did!

With a special pen, a 3 cm in diameter circle (a bit over 1 inch) was drawn around the mass.

However, we cannot remove a circular area of the skin (the scar would be tight and ugly). We can however remove an oval area. So the shape was changed to this:

Then the mass was removed along those purple lines (OK, OK, for the purists, this is a fusiform shape, not oval).

One week later, the biopsy came back. A mast cell tumor was confirmed – a grade 2, which is considered “intermediate.”

(Grade 1 is low grade or least aggressive, grade 2 is intermediate grade, and grade 3 is high grade or most aggressive)

The good news however is that being aggressive to remove the mass (and not wishy-washy) allowed us to “get it all.” Here is a picture of the incision:

Now, Emmie has fully recovered and can enjoy her walks again.

The amazing story of Rori and her lung tumor

In June 2016, Rori, a 12 year old Westie, had visited the emergency hospital because she wasn’t feeling well. She was depressed and coughing. 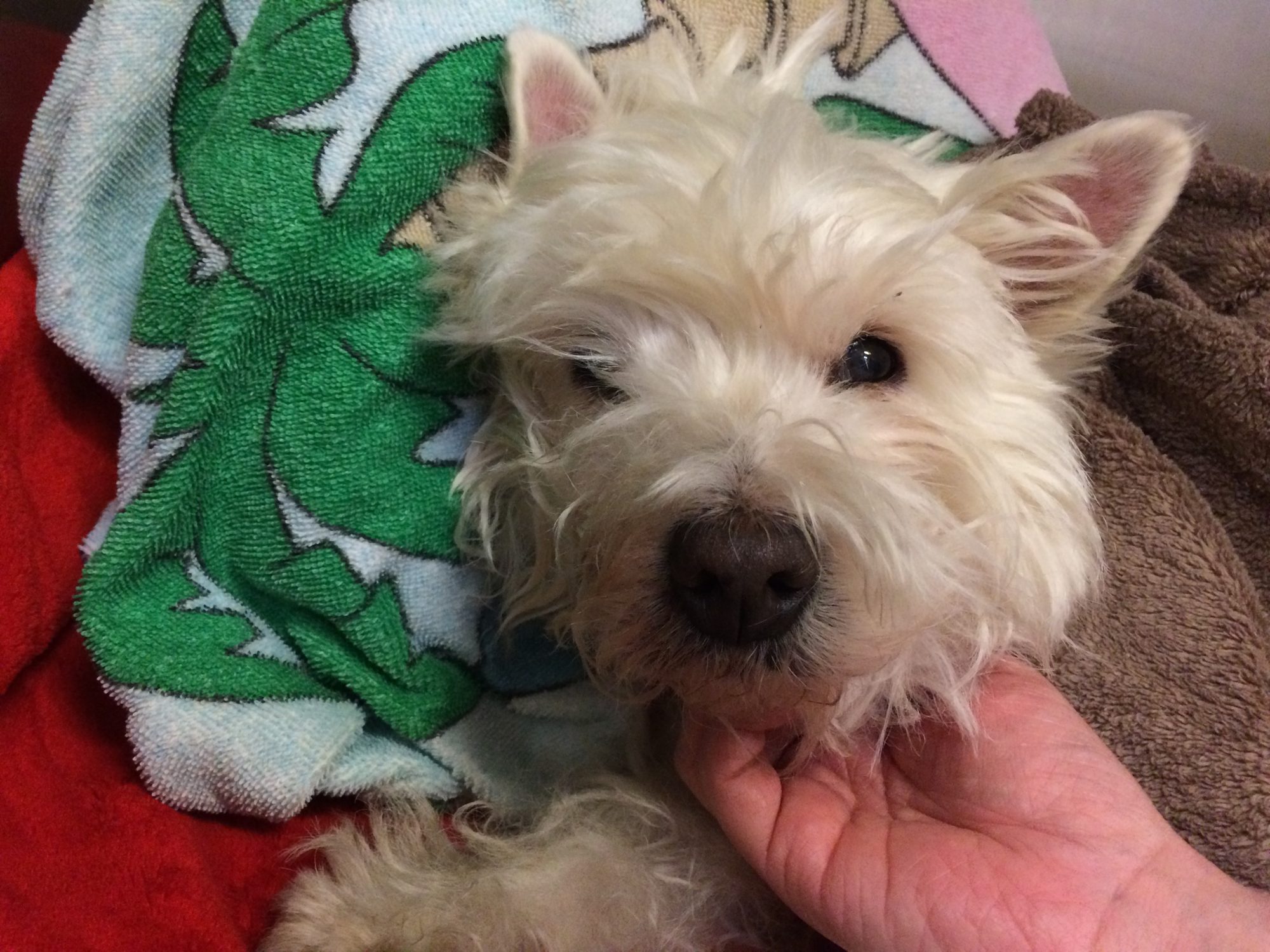 Chest X-rays revealed a mass in her left lung. She did well for a few months, until her next set of X-rays in February 2017.

They revealed that the mass almost doubled in size (the round mass is at the end of the arrow on the X-ray below)! 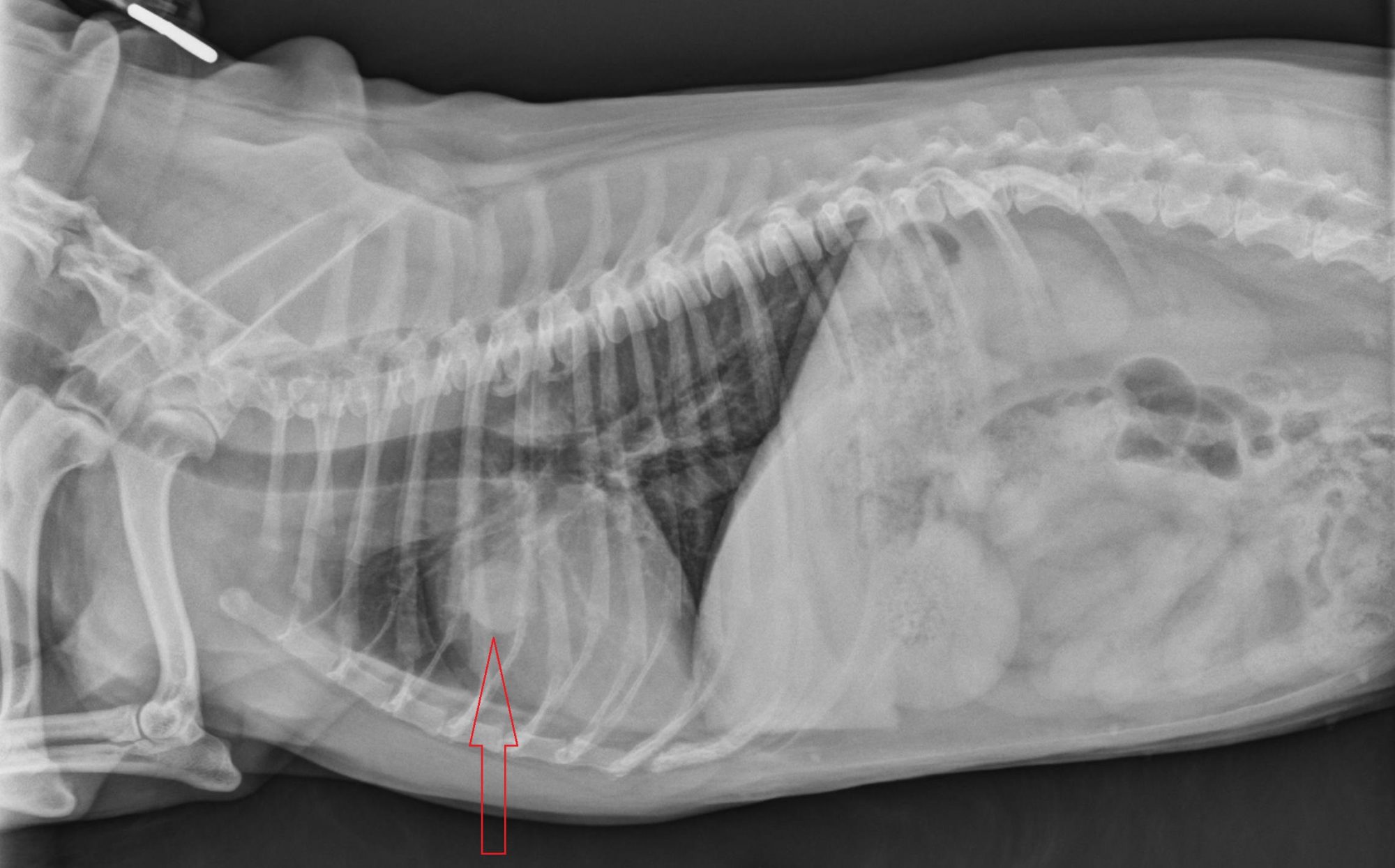 Because of the high risk of lung cancer, surgery was recommended to remove the part of the lung that contained the tumor.

The odds were definitely against us: about 85% of lung tumors are cancerous. In addition, lung cancer is aggressive: the average survival after surgery alone is around 1 year. Lastly, a tumor that doubles in size in a few months is a definite concern.

Despite the odds, Rori’s owner wanted to provide the best possible quality of life for her dog and elected to move on with surgery.

To remove the tumor, we don’t “crack the ribs” like they say on TV. Rather, we go between 2 ribs. After entering the chest, the mass was found exactly where the X-rays showed. The mass was approximately the size of a nickel (the coin shown below is a quarter).

Below is a video during surgery. Warning !!!

THIS VIDEO IS VERY GRAPHIC, SO IT IS NOT FOR THE FAINT OF HEART !!!

That part of the lung (called a lung lobe) was sutured and removed. We did not see any other problem, so the chest was sutured closed.

The mass is visible on top of a lung lobe

The evening of the surgery, Rori ate her first meal !

The next day, she felt much better and was amazingly comfortable. She eventually went home.

A few days later, the biopsy report came back.

Despite the very high odds of cancer, unbelievably, the mass was… benign!

This was fantastic news. It meant that the mass should not affect Rori’s lifespan at all.

Few pet owners would have put their 12 year old dog through open chest surgery, knowing the risk of cancer was so high. But Rori’s owner chose surgery… and was rewarded in an unexpected way.

It’s been 6 weeks since surgery, and Rori is doing very well during her recovery.

I explained to her owner how to slowly increase her activity level over the next month.

Both are thrilled with the idea!